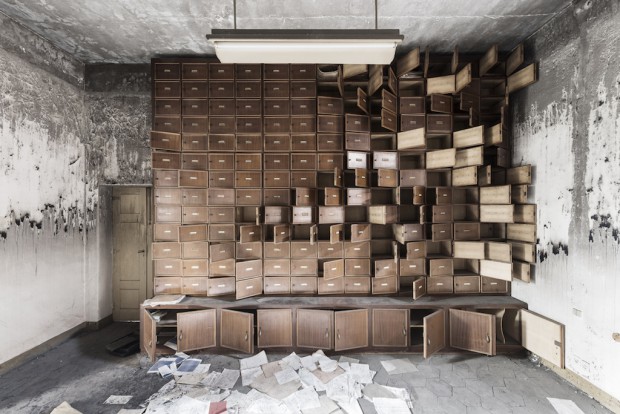 Reginald Van de Velde is not only an award winning photographer. As a devoted traveller, he does all it takes to visit forsaken places all over the world and to – as he puts it – trying to capture the momentum of a fragile abandonment.

Above all, Reginald is a raconteur. His photographs tell of the past splendour found in derelict hospitals, mothballed monasteries, defunct power stations, and crumbling castles. Providing a story to every picture does not demystify them, it simply lets you feel his excitement, the metallic taste in his mouth after climbing a mountain in Bulgaria at -15°C and in the back of your brain but purely – you feel that urge to pack your camera and start traveling again.

Now he published his first photo book “Between Nowhere & Never” with a narrative by Mirna Pavlovic and after the initial exhibition in Ghent, Belgium he found some time to talk to us about it. Hey Reginald! That`s one fine book you did there! In which stretch of time did you take the pictures?

How are you getting to know about the places you covered?

Researching and traveling to those places must be quite time and money consuming. Are you photographing full-time?

The time spent on research and travel is enormous. And since I have a fulltime job as a graphic designer, it’s basically all my free time being spent on this passion.

But in terms of money consuming, it still is very manageable. Exploring trips can be very low cost if you’re a bit creative. Flying low fare airlines is a must, and what I always do is pick the smallest airport I can find in a city that holds no touristic value. And that’s just perfect as a starting point. You can find flight tickets as low as 25€, which will bring you to an airport with absolutely no people and no queues. Renting a car in such a small airport is bliss: the car is just parked outside the terminal. No shuttle busses, no parking lots, it’s just there. Brilliant. Such a time saver.

Next up is the sleeping arrangements. We do quite a few sleepovers in abandonments to cut hotel costs. Abandoned hotels that still have some clean beds are perfect. And if you’re lucky, the honeymoon suite is still in mint condition. So much fun! I did some sleepovers in abandoned hospitals as well, and was lucky to find them still plugged in to the electricity grid. Ideal to charge those (camera) batteries. And of course you can rely on foreign friends of having a sleepover at their place. I really love those experiences, because you learn so much about a country and its people. And of course I return the favour and offer a sleepover to my exploring friends from abroad. You have a lot to talk about. Love how you describe the way how you came to a specific picture. It puts a human touch in your photo. There is a narrative in the book by Mirna Pavlovic, weaving the pictures together. Can you tell us why letting the pictures speak for themselves isn’t enough for you?

Every picture, every location has its own story. There’s just so much more to a picture than just the shot itself. The travel, the difficulties, the hardship that went into it. The fails, the encounters with copper thieves, the early bird attempts, the scouts at night, the climbs, the close calls, the busts. But also the joy of finding unspoiled stuff, treasures, meeting great people, and all things resulting in The Great Adventure. It’s those experiences that I want to share via my stories.

Do you have an exclusive story for us?

I did Buzludzha in winter time couple of years ago, and still haven’t published the story. It’s certainly in my top 3 of Best Explores ever. I rented a 4×4 car at the airport of Sofia, and adventure started right there. Instead of having a car rental at the airport, we opted for a non kosher cheap-as-fuck car rental from an independent company. Not sure if you could call it a company, I think it was just a person who rented out his car. I had to pick it up at at dodgy spot outside the terminal, at 23 o’clock at night, with hush-hush arrangements. They gave me an old eighties 4×4 jeep that was pretty much slated for demolition. Great! With no satellite or navigation I travelled Bulgaria, just relying on a couple of printouts from Google Maps. Worked like a charm.

Doing the Buzludzha monument in winter time requires the proper preparation: we drove the 4×4 in the deep snow as far as we could, and dropped it somewhere “near” the area of the monument. Winter was in full swing, and the temperature was -15°C. The snow and the wind turned this place into a white hell. We put on our snow racket shoes and hiked another 45 minutes through the deep snow, with barely any direction. At last we finally stumbled upon the monument, it was only visible within 10 meters distance.

And there you are. Full of joy and excitement. Seeing this enormous building for the first time up close. Touching it. Feeling it. You’re completely in awe! Speechless. And you think the hard work is all done, and you’ll be able to capture it with your camera. Boy, was I wrong. We still had to face the biggest challenge: getting up. The big hall is at level two of the building. There are two flights of staircases, and both of them were transformed into frozen waterfalls. It had been raining a lot in the previous months, and all that water turned into a solid massive block of ice. We couldn’t get up. It was just impossible to go up the stairs. What followed was a dangerous climb upwards, laying flat on our belly, and pulling us up by using debris and rocks sticking out of the ice. While holding our backpacks and tripods. Quite the endeavor. My buddy slipped and fell, bruising the complete left side of his body. The things we do to get a pic… Some people don’t like to tell about the objects they photograph. Would you say its more important to create an awareness for a lost place than to „save“ it from other urbexers?

The community has exploded over the last few years, and it’s sad to see how fast a certain location can go down. Narrowing the window of opportunity to actually shoot the place. I choose not to disclose the whereabouts of places I visit, in order to prolong the existence just a tad bit longer. These places are so fragile.

In your book you are often stating to search the blissful ignorance of your childhood when you go on your adventures. What`s up with that?

The town where I grew up had lots of abandonments: castles, villas, some factories, … From a very young age we would venture into those forbidden structures and make them ours, turning them into our playgrounds. I reflect those juvenile times a lot. We were without a care in the world, already exploring beyond the boundaries of any rules that could be implied on us. Escapism is at the basis of my today’s explorations, and it’s the solitude I want to capture and show through my photographs.

One last thing everyone is curious about: You are from Belgium. Why are there so many beautiful lost buildings over there. It’s a Mekka for Urbex Photographers.

True, we have so much to offer. From heavy industry to charming castles and everything in between. The reason why we have so much spots in a pretty perfect state is a combination of a couple of things. On the one hand we have the heritage from our past, the heavy coal and steel industry, that have been closing throughout the years because of the economic downfall and European regulations. Security is lax, rendering them as fertile grounds for two parties: metal thieves. And us. On the other hand we have the private properties, the villas, houses and castles. Belgium is notorious for its bureaucracy, and most of these properties will have a history of disputes, awaiting a final decision from a courthouse. Or the parents have deceased and the kids (if any) don’t have time to look after the property. “We’ll sort it out next year”, is their attitude. And one year becomes two years. And two years becomes a decade.

One thing I don’t understand about our country is the current energy crisis. From 2007 till now I witnessed the closure and demolition of at least 8 powerplants. Our nuclear power plants are either malfunctioning or put on standby because of security reasons. Resulting in a shortage of energy, which we have to import. The crisis was at its peak last year. Who decided to demolish all those existing coal fired power plants? Why wasn’t any of them transferred into a biomass/gas power plant? I don’t get that. Sorry for the rant. In any case, Belgium pretty much leads the urbex charts of most defunct power plants per square meter. So much fun exploring them.

Where are you heading next?

That’s for me to know, and for you to find out 😉