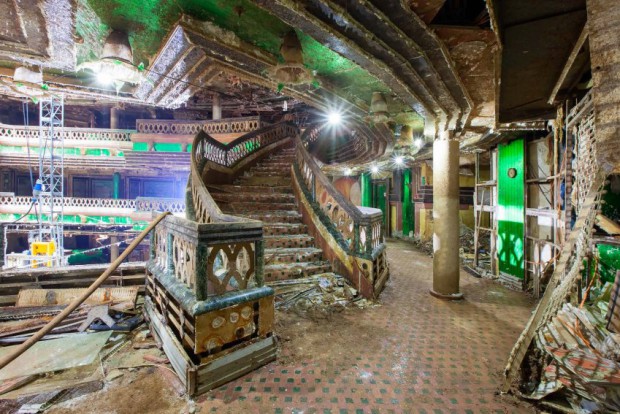 In August 2014 Nuremberg photographer Jonathan Danko Kielkowski is standing at the port of Genoa, Italy. In his range of vision lies the wreck of the Costa Concordia. This 290 Meter long and 36 Meter wide cruiser of the mediterranean sea wrecked on the 13th of January 2012 with more than 4000 passengers, close to the Italian island of Giglio. 32 people lost their lives in the course of this event. It took the recovery team one and a half years to lift the ship and ten more month to tow it into the harbor of Genoa, Italy.

All of this is on Kielkowskis mind in this August night. He ventures a swim and soon finds the „Concordia“ not only unguarded but with open doors and switched on lights. It´s like the ship has waited for it`s story to be told, for it`s interior to be seen before it gets demolished.

The pictures Kielkowski brought back are staggering. They give insight to a divided world. Like a stranded giant whale a part of the ship was underwater for more than a year, while another part remained over water. So while e.g. the bar looks like it belongs to the Titanic (which wrecked almost exactly 100 years before the Concordia), the gym looks barely touched. All photos by Jonathan Danko Kielkowski